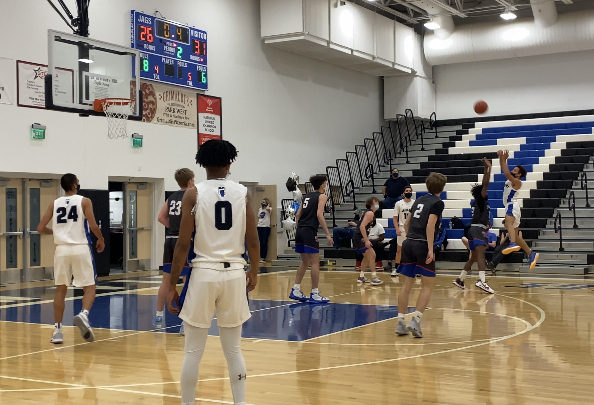 The Arcadia Titans (6-3) took the win over the Canyon View Jaguars by a score of 58-53 on Friday night at Canyon View Arena.

“They’re one of the top teams in the state, and for us to come and push them around a bit, that helps us in the future,” coach Adrian Orona said.

The Titans started the game off playing solid defense, but junior guard LaDarien Hayes got going in the first quarter and the Jaguars trailed 18-8 at the break.

Sophomore Conner Aldridge and his twin brother Cohen, got the Jags moving in the second quarter by scoring 14 points and pulling Canyon View to within five points at the half.

In the beginning of the second half, junior Dante Marshall opened the scoring and Brycen Cosgrove knocked down consecutive three pointers putting the Jags in the lead 39-35. With only a second left, Conner Aldridge ended the third quarter with a three pointer, making the score 45-39.

During the fourth quarter it was anyone’s game, but Arcadia pulled away late and the Jaguars were forced to foul. As the game was coming to an end, Conner Aldridge hit a three-pointer with seconds remaining to pull Canyon View to within a basket, but the Titans knocked down their free throws to ice the game.

The Jaguars’ next game is Tuesday night against the Ironwood Eagles (8-1).