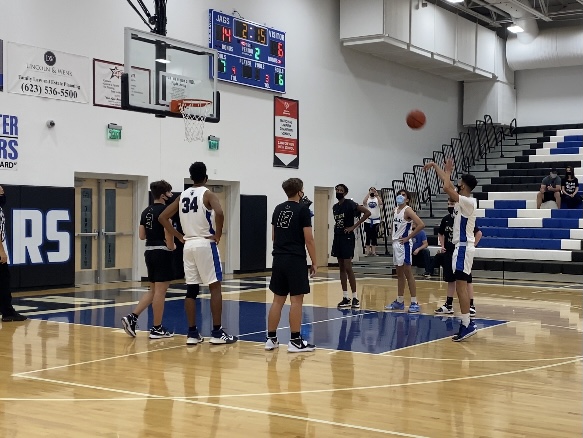 The Canyon View varsity basketball team lost to Verrado 45-41 at Canyon View Arena on Friday night. Last night’s game was more of a defensive struggle than when these two teams played earlier in January. Verrado won that game as well by a score of 67-47.

“We have a lot of growing up to do, we had a team that we should have beat both times,” coach Adrian Orona said. “I have to make us not just a family, but a team.”

Junior LaDarien Hayes got the Jags going by scoring eight points in the first quarter putting the Jags in the lead 11-5.

During the second quarter, junior Danny Diaz scored and junior Dante Marshall scored at the free throw line to put the Jaguars up 16-13 at halftime.

Hayes made a 3-pointer early on into the 4th quarter to keep the Jaguars in the lead and with only three minutes remaining Verrado and Canyon View were tied 35-35. The Jaguars kept it close as the time wound down, but Verrado pulled through with a four point win.

“Tonight we kept at it until the 3rd quarter,” junior Qamar Outley said. “We just need to work hard out there, grab more rebounds and play together more. We’ll get it next game.”